Home
About Us
Fun Shops
Showcases
Performers
Links
Contact Us
Your basket is empty. 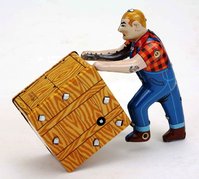 Tin plate was used in the manufacture of toys beginning in the mid-19th century. The toys were made from thin sheets of steel plated with tin, hence the name tinplate. They were a cheap and durable substitute for wooden toys. The toys were originally assembled and painted by hand. Spring activated tin toys originated in Germany in the 1850s. In the late 1880s off-set lithography was used to print designs on tinplate. After the colorful designs were printed on the metal, they were formed by dies and assembled with small tabs. The lightweight nature of the toys allowed them to be shipped less expensively and easier than the heavier cast iron toys. Every Tin Toy starts out as a flat sheet of metal that is printed and then cut into separate pieces. Each piece is then formed into it’s final shape through numerous tooling stations. The pieces are hand assembled to create the final toy. A labour-intensive process, Tin Toy production was quickly abandoned when plastic moulding was developed. In general Tin Toys are "Collectors Pieces" or "Decorative Items" and unless otherwise stated are not suitable for children under 14years.